A couple weeks ago, I was lucky enough to visit Baku, Azerbaijan. It's a beautiful, welcoming, and friendly city in a developing country hard-hit by the drop in oil prices. But in order to explain how I ended up in Baku, we have to rewind a couple years back to when I was in college at the University of Minnesota. Orkhan and I were grabbing some food at Applebee's. Orkhan is Azeri, and very proud of his culture and heritage. He mentioned that if I was ever in Russia while he was in Azerbaijan, he would be more than happy to show me around.

Fast forward a couple years. I'm on winter break, enjoying my freetime, when Orkhan messages me:  Hey, you should come to Azerbaijan! Long story short, a week and a half later, I was at the airport, ready to fly to Baku, Azerbaijan. Guess who got upgraded to first class?! :)
After I landed, I had to go through customs where they asked me a few curious questions. Namely, they asked for the full names of both my parents, and then the customs agent noted that my name didn't sound Russian, so did I have any other roots? The agent asked me these questions because Azerbaijan doesn't let anyone from Armenia-- and even people who are not Armenian but are of Armenian descent-- into the country. The reason for this stems from a drawn-out border and land conflict in the Nagorno-Karabakh region that culminated in an undeclared war between 1992 and 1994, with a number of casualties from both sides. You can read more about the conflict and peace talks which are ongoing even today here.

I decided not to mention my German and Jewish roots just so I wouldn't have more explaining to do, the lady stamped my passport and said, "Welcome to Azerbaijan."

Orkhan and his friend Firdo greeted me at the airport. The international terminal was built in 2013, and it's gorgeous. Azerbaijan's economic oil and gas boom led to investment into large building construction. Plus, Azerbaijan hosted the 2015 European Games, so I'm sure the government wanted to put its best image forward. Besides the airport, some notable new constructions include the Olympic Stadium and the Sports Complex.

The ride to the center of Baku took almost an hour due to the heavy traffic in the center. Oh yes, Azerbaijani drivers... let's just say lanes and rules of the road are totally and utterly optional. There were many moments where we were centimeters from the car next to us as drivers wove in and out of lanes, or, more commonly, made about 5 lanes where there were officially 3 in order to move through the traffic faster. I can laugh about it in retrospect since I'm still alive and no accidents occurred. Haha!

Eventually we made our way to the center of the city, where my hostel was located. The location could not have been better: it was right in the Old City, which is a historic part of Baku surrounded by old walls and a very ancient feel. It took a while for us to find the exact location of the hostel. The buildings are close together, particularly in the alleyways and there aren't too many building numbers. Eventually, though, we found it. Heck of a first impression, though. Lol.

The hostel itself was very nice. Caspian Hostel was rated as the top hostel in Baku for the past two years, and I can see why. The hostel was very clean and quaint and the hosts offered a simple breakfast every day, wifi, comfortable beds, and most importantly, location! Seen below is the courtyard of the hostel, which, as you can see from the hanging laundry, is also where the family lives, too.


After dropping off my stuff, Orkhan and Firdo took me through a stroll through the center of modern Baku, which was just a 10 minute walk from my hostel. I went to exchange some money, too. Due to Azerbaijan's heavy reliance on oil-- it accounts for 94% of the nation's exports and 73% of the budget-- Azerbaijan's economy was hard-hit by the fall in oil prices. After depleting half of its foreign currency reserve, the government decided to stop propping up the manat and the currency fell by a third against the dollar in December 2015. This is in addition to its fall earlier in the year. My US dollars were highly popular. Obviously this drop in currency really hurt many Azeris. It's not just Russia suffering from cheap oil prices.
After exchanging some money, we walked around the square and made our way toward the waterfront. My geographically-challenged fellow Americans reading this post probably don't know where Azerbaijan is. Check out the map below. Azerbaijan borders with a number of countries including Iran, and its eastern border opens onto the Caspian Sea. 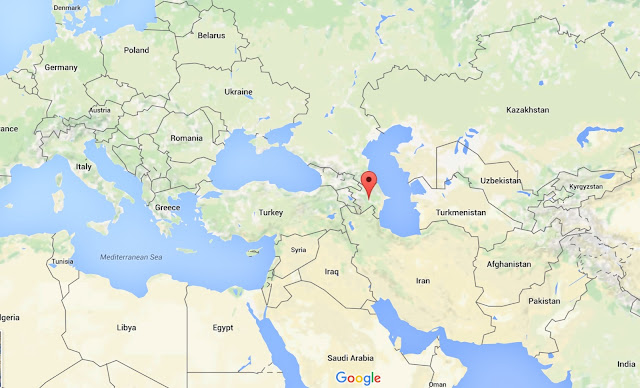 Baku is a city right on the sea and the waterfront was a gorgeous area to stroll through. Also note the palm trees. The climate is reasonable. I am totally be down with this kind of winter. 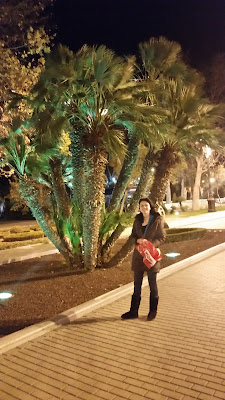 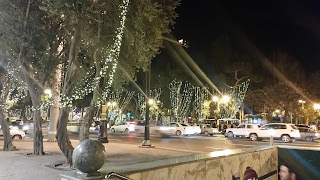 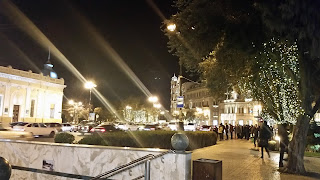 Here I have to pause and introduce you to Aslan, who's also a really cool Azeri guy whom I met at the U a few years back. Knowing I was coming on Friday night, Aslan and Orkhan arranged a really nice evening meal with friends at a fancy restaurant serving authentic Azeri food. After our stroll through the center, Orkhan and I drove to the restaurant, where I got to meet a number of their friends and try some dank food.

We had fresh vegetables like tomatoes and cucumbers and fresh greens that are apparently commonly served with the meal, really salty cheese, black and green olives, eggplant-wrapped rolls, and a sort of vegetable ragu salad. Those were just the appetizers. Then they brought out something called Qutab, which is a thinly-rolled dough filled with meat or greens and then fried in a special griddle. Then came the main course, which was a lot of delicious meat-- chicken, beef and, of course, lamb. Since Azerbaijan is a Muslim country, albeit a predominantly secular one, no pork is served at authentic Azeri restaurants and the meat is Halal. I also had a glass of semi-sweet Azeri wine and even though I'm usually not a big fan of wine, it was delicious and really complemented the food.

Once we were done with the meal, the guys decided that we'd go drink tea somewhere else. We got into the cars, ignored the lane markings along with all the other cars, and made it to the cafe. The servers took us to a private room with a big TV, funky decor, and a big table with chairs and couches for everyone's comfortable lounging. There we were served tea in crystal glasses which apparently are called pears because of their shape. They're supposed to enhance the smell of the tea, I think. 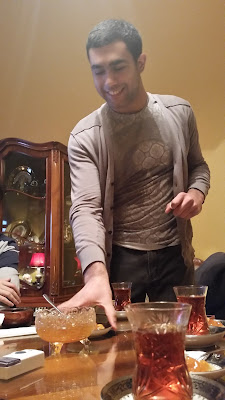 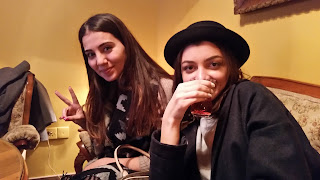 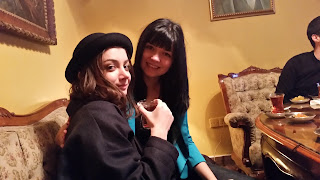 When the guys said, "Hey, let's go drink tea", I thought we were going to just drink tea. But instead, the servers brought out white cherry jam and watermelon jam and baklava and a beautiful hookah with some really flavorful shisa.

I still have many more pictures so I decided to split this my trip into two posts. Part 2 to come later. And if so many cool things happened on just the first day I was there, imagine how awesome the rest of the trip was. Shoutout to my amazing hosts, Aslan and Orkhan!

Four Travel Hacks That Will Save You Money